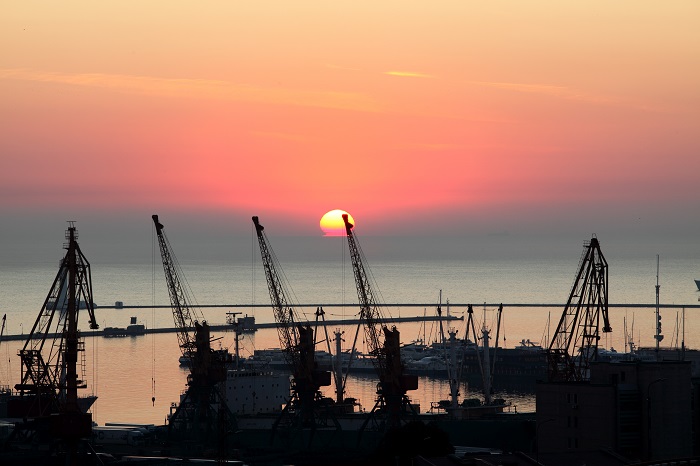 Asia-to-Southern Europe shippers now have quicker cargo transport options than the traditional Shanghai-to-St. Petersburg route, in Russia’s Novorossiysk port and Ukraine’s Chornomorsk and Odessa ports. In addition, as the latter ports expand and deploy economies of scale, their rates may drop below the traditional route as well. (Above: The Port of Odessa, Ukraine.) Photo credit: Shutterstock.com.

Asia-to-Europe shippers transporting cargo to the European Union are likely to benefit from increased Black Sea/Caspian Sea competition — something that should decrease transportation times and rates, in addition to improving shipper services.

Prior to 2000, Black Sea and Caspian Sea port development as hubs for Asian cargo occurred at a slower rate than Baltic Sea ports. The majority of shippers did not consider the former to be transshipment points for European desinations. However, that’s changed recently with the establishment of container cargo facilities in the region. As a result, Caspian Sea and especially Black Sea facilities, under selected conditions, offer a time/rate advantage versus the major Baltic seaports of St. Petersburg and Klaipeda.

One example: Black Sea ports offer a more-feasible option for Asian shippers transporting goods to Southern Europe, due to geographical proximity; St. Petersburg and other Baltic Sea ports are more suitable for cargo destined for Northern Europe and Nordic states.

Further, while the Shanghai-to-Novorossiysk route costs more, in general, the route may interest shippers specializing in high-priced cargo, including perishable cargo.

One upgrade example is the NUTEP terminal, Novorossiysk’s largest, which will add a berth and deepen water to 15 meters (49.2 feet), so that it can hande 8,000- to 10,000-TEU ships, and also build a new container terminal, by year-end. Currently, Novorossiysk can handle ships only up to 4,000 TEU.

According to Alexey Garmash, general director of Novomorsnab Ltd., a leading Russian transport and forwarding company operating at Novorossiysk, this year the port is handling a large volume of export container cargo, primarily due to the weak ruble and the ongoing trend of containerization of export cargo in Russia. (The ruble is down about 10 percent versus both the euro and dollar since January. As the ruble weakens against the euro and dollar, it makes Russian goods less expensive for euro-denominated and dollar-denominated purchasers, all other factors being equal.)

Analysts at the Russian Union of Industrialists and Entrepreneurs, a public association of Russian businesses and shippers, believe that with Novorossiysk’s new facilities, it will become the largest container shipping port in the Black Sea region.

However, other Black Sea ports will compete for Asian cargo, especially the Ukrainian ports of Chornomorsk and Odessa.

Chornomorsk, with a 1.15 million-TEU annual capacity, is one of the largest Ukranian container shipping ports, but in recent years its volume has been insignificant. However, that should change with the arrival of Hutchison Ports: the company has agreed to lease the port from the Ukranian government for 49 years, with a contract signing expected by the end of this month.

According to a Chornomorsk spokesperson, the port has the technical specifications to become a major container hub on the Black Sea. It has a 6-kilometer (3.7-mile) quay line, a 14-meter berth depth, and it can handle three container ships simultaneously, including those up to 300 meters in length.

However, unlike Novorossiysk, Chornomorsk lacks regular deliveries by high-speed container trains. Still, officials say the arrival of Hutchison Ports will create conditions for the establishment of relevant railway infrastructure around the port and its container terminals — an upgrade capable of attracting container lines to the port.

Meanwhile, officials at Odessa, Ukraine’s largest port, accounting for about 85 percent of the nation's container volume, have announced their own expansion plan. And recently, DP World expressed an interest in managing the port’s container facilities.

Finally, shippers from China’s western provinces seeking goods transport to Europe have another transport option in Turkmenbashi Seaport, a modern port recently commissioned in Turkmenistan. On the Caspian Sea, the 400,000-TEU annual capacity port occupies 249,000 square meters, and can handle ships up to 510 meters in length. The new port is also capable of operating year-round and is expected to be part of the existing shipping Europe-Caucasus-Asia (TRACECA) route.

The TRACECA route extends from Western China, through Central Asia (Kazakhstan, Kyrgyzstan, Tajikistan, Uzbekistan, and Turkmenistan) to the Caspian Sea, to Turkmenbashi and then to the Azerbaijanian port of Baku. From Baku, cargo then proceeds to a port on the Black Sea in Georgia (either Poti or Batumi), and then to Ukraine’s Odessa, followed by truck transport to the European Union in Romania, the route’s end.

According to preliminary shipper estimates, TRACECA route cargo delivery will cost about $5,500 to $6,000 per TEU. That’s still cheaper than an alternate route, Russia’s Trans-Siberian Railway, which costs about $6,000 to $7,500 per TEU.