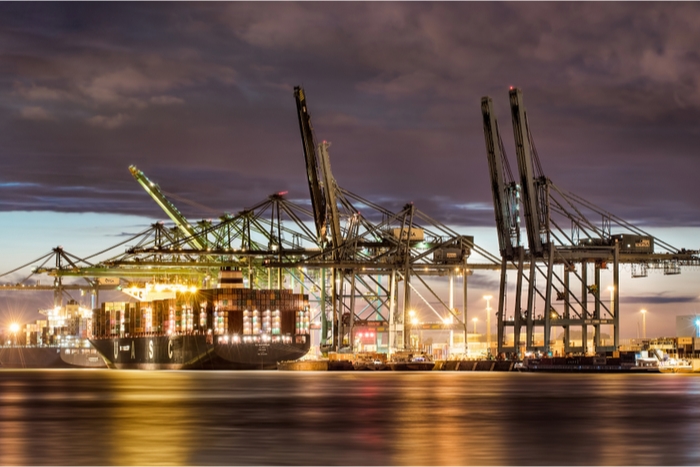 The Port of Antwerp, and Europe

Europe’s three largest port gateways have warned of a significant hit to container volumes this year as the demand-limiting measures to combat the spread of China’s coronavirus (COVID-19) lead to unprecedented capacity cuts by carriers on the Asia-Europe trade.

Almost half the scheduled container shipping departures on Asia-North Europe were canceled in the past four weeks, with more capacity cuts to come, according to Alphaliner.

Michiel Vermeiren, shipping lines manager at the Port of Antwerp, said container volume growth was expected to turn negative in the coming months as the coronavirus brings container movements within China to a standstill.

“We expect an impact on the westbound trade and a decrease in business of around 115,000 TEU for the year,” Vermeiren told JOC.com. “It is a rough estimate if we lose one month of traffic through the blank sailings and with less cargo between Asia and Europe.”

Leon Willems, spokesperson for the Rotterdam Port Authority, said the coronavirus could knock 1 percent off its annual volume, which after recording a throughput of 14.8 million TEU would amount to 148,000 TEU.

Axel Mattern, joint CEO of Port of Hamburg Marketing, said China was the port’s largest trading partner and cautioned the measures employed by Beijing to address the coronavirus would have repercussions on foreign trade.

“Depending on how long restrictions last in the Chinese economy, a marked downswing could occur,” Mattern said in a statement on Hamburg’s 2019 performance. “With some delay, that would then be reflected in freight handling to and from China in Hamburg. We can only assess the position at the end of the quarter, at the earliest.”

An Alphaliner survey of the Asia-North Europe services show that 33 sailings have been canceled in the last four weeks, or 46 percent of scheduled departures on the route. Carrier schedules and customer announcements indicate that another 17 sailings are to be blanked in the next four weeks, which the analyst said would bring capacity reductions over the eight-week period from the Chinese New Year to about 700,000 TEU.

The need for the blanked sailings is clear: Almost no cargo is being shipped from the world’s single-biggest manufacturing center. Vermeiren said the main challenge remained the connectivity to the Chinese hinterland. “A lot of container equipment is stuck inland and at the ports and cannot be transported to the ports where it is needed,” he said.

Forwarders in China told JOC.com that trucking logistics and the difficulty in moving loaded and empty containers to and from ports were challenges that were difficult to overcome.

“We start to feel the backlash from inbound cargo — vessels are blanked in China, which means rate increases on the inbound side as well,” he added.

Kuehne + Nagel spokesperson Dominique Nadelhofer said the forwarder was seeing a tightness in imports into China, although the impact on exports from China remained to be seen. He said the likelihood of delays moving cargo out of China was high, with major ports and airports currently operating under a reduced schedule.

“Over the last few days, we have seen additional measures — closure of certain highways, strict control of the movement of people within and across provinces — taken by various provincial governments to contain the potential spread of the virus,” Nadelhofer told JOC.com.

“We expect this circumstance to have a knock-on effect on production capacity and cargo flow now that China is returning from the prolonged Chinese New Year holiday,” he added.

Despite the many canceled sailings, container demand recovery has been very weak as China’s factories slowly come back online, with vessel utilization at low levels. But the potential knock-on effect as production ramps up is beginning to raise red flags.

Alphaliner warned that capacity constraints could begin to affect the backhaul routes in the coming weeks, as the current canceled sailings from Asia would limit outbound capacity from Europe.

Reichel said the withdrawn capacity meant some carriers were fully booked from Europe to China until the end of March. Asked whether Hapag-Lloyd was experiencing that demand, a spokesperson for the Hamburg-based carrier said: “We can confirm that ships from Europe to Asia are highly utilized during March. We can see trade to China picking up after the extended CNY holidays.”

Willems agreed, adding that it was common after such a production interval for there to be a spike in manufacturing output and cargo shipments afterward to make up for lost time.