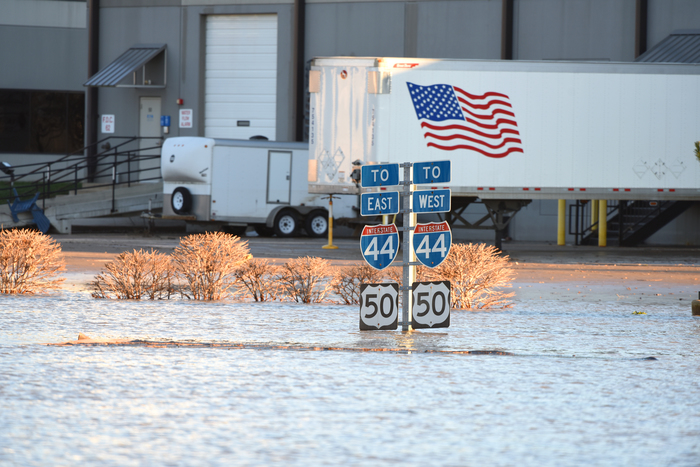 Flooding that began in March is still disrupting transportation across wide swaths of the US Midwest. Photo credit: Shutterstock.com.

The Panama Canal in April instituted draft restrictions that are eating into available container capacity to the US East Coast from Asia, the latest sign of how more severe weather from climate change, in this case drought, is already disrupting international supply chains, increasing costs, and decreasing efficiency.

But don’t take JOC's word for it. “Global warming is happening,” Jeremy Nixon, the CEO of Ocean Network Express, said in his keynote address at the TOC Asia Exhibition.

At the JOC’s TPM 2019 Conference in March, Nixon said that from April to August 2018 stronger and more frequent typhoons forced the closure of the port of Shanghai, the world’s busiest container gateway, for a total of 27 days. “Almost one month out of five months last year, the port was closed,” Nixon said, explaining how the closures threw off schedule reliability and extremely high terminal utilization and how a lack of excess terminal capacity made it difficult to speed up cargo operations to make up for lost time.

And Nixon is by no means the only member of the maritime sector to see the risks. On April 30, 110 mostly bulk shipping companies, signed a letter calling for mandatory slow-steaming to be adopted at a May meeting of the International Maritime Organization’s (IMO’s) greenhouse gas (GHG) working group.

The letter, which did not include the signatures of any container carriers, has set off a flurry of debate over the merits of such an approach for the container sector, especially as relates to perishables such as fruit exports. Regardless of the efficacy of slow-steaming as an emissions reduction strategy, the debate reveals a newfound seriousness among shipping’s most critical stakeholders in addressing the issue of climate change.

When it rains, it pours

In addition to the Panama Canal, the Rhine River and other inland waterways in Europe are also experiencing the effects of prolonged drought firsthand. Rhine water levels were so severely impacted by drought in 2018 that barge shipping from Kaub, outside Frankfurt, to Basel, Switzerland, was forced to stop completely from October 2018 until the end of January.

Even when traffic resumed, concerns remained over water levels, as warmer temperatures prevent glaciers from accumulating more icepack and deplete the supplies needed to keep the Rhine flowing at levels high enough to support commercial vessel traffic. Carriers last month began imposing low-water surcharges earlier than normal and raising concerns that a long, dry summer will repeat the bottlenecks experienced at the end of last year.

In addition to extracting a heavy commercial toll — BASF, for example, was forced to declare force majeure for some products — the 2018 river closures caused spot trucking rates to jump as shippers scrambled to keep cargo moving. This put immense extra pressure on a mode already grappling with chronic driver shortages and a lack of capacity.

And it’s not just waterborne cargo that’s being impacted by climate change. Phoenix’s Sky Harbor International Airport made headlines in 2017 when extremely hot temperatures made the air too thin for some aircraft to attain the lift necessary to take off.

One way to cope with that thinner air is to lighten an aircraft’s payload, which means less capacity for air cargo shipments, which are already the most expensive mode of transportation. The number of summer days where weight restrictions have become necessary for aircraft has increased since 1980, and if temperatures rise 4-5 degrees Celsius as forecast by 2100, weight restriction days will increase between 50 and 200 percent at Sky Harbor, LaGuardia in New York City, Denver International, and Washington D.C.’s Reagan National Airport, according to a 2014 study from Columbia University. When restrictions are necessary, cargo is typically left behind before passengers, the authors note.

Meanwhile, Phoenix was back in the news this year after snow crippled the airport there in February because crews lacked the equipment and knowhow to keep planes moving in those conditions. The last time it snowed in Phoenix was in 1933, according to AZ Central.

It’s too early to tell if that snow is a harbinger of more winter weather in Phoenix generally, but there is no denying that changing weather patterns will bring with them a whole host of new operational challenges and considerations for logisticians.

Consider Houston, which after Hurricane Harvey in 2017 had been punished by three “500-year” floods for three straight years. As certain geographic regions show themselves to be more prone to weather events that statistically ought to only occur over a period of time spanning hundreds of years, the commercial considerations for hosting operations in those locales must be closely scrutinized.

Yet even those efforts may not be enough to insulate supply chains from disruption. Case in point, the recent catastrophic flooding throughout the US Midwest that took out roadways and railways across a swath of the country ranging from South Dakota to Kansas.

In addition to the costs of dealing with disruption or scrutinizing and reorienting existing supply chain networks, there are investments to be made toward decarbonizing the supply chain.

It is important to distinguish these investments from the costs of disruption on both a semantic and practical level. Consider the efforts in the ports of Los Angeles and Long Beach to electrify yard equipment. In the short term, it will cost more to retrofit and upgrade that equipment to run on renewables, but those investments come with a remarkable upside that is evident from a quick look at the German energy market.

While relatively rare, there have been a number of instances where German power companies paid consumers to use electricity on particularly bright or windy days, as the providers needed to ensure consumption of excess capacity. There were more than 100 such instances in 2017, according to The New York Times.

Last month, the European Parliament voted overwhelmingly to approve a legislative proposal that set the first ever EU-wide carbon dioxide (CO2) emissions performance standards for heavy-duty vehicles. If approved by the European Council, the regulation will mandate a 15 percent reduction in average CO2 emissions for trucks heavier than 7.5 metric tons by 2015.

According to the World Shipping Council (WSC), international logistics accounts for about 2.5 percent of global GHG emissions, and maritime container shipping accounts for a quarter of that. The IMO last year set a target of a 50 percent reduction in absolute GHG emissions from 2008 levels by 2050 and a 40 percent reduction in carbon intensity ("emissions per transport work") by 2030. But as with the electrification of landside cargo-handling equipment and tough new emissions standards on commercial trucks, these reductions will come at a significant financial cost to the industry, costs that will necessarily be passed on to shippers and end consumers.

All of this is to say, the global supply chain is already paying the costs of climate change, and shippers must start building resiliency into their operations, whether they want to gain an edge on the competition or just keep business going as usual.